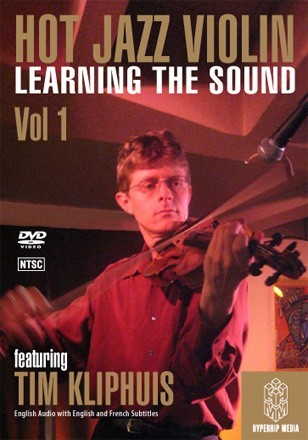 Dutchman Tim Kliphuis has often been named as Stéphane Grappelli’s successor, bringing Grappelli’s legacy into the 21st Century by infusing Gypsy Swing with Folk and Classical music. Tim’s spirit and style are reminiscent of Grappelli: virtuoso playing with a great love for melody.

On this DVD, Tim guides and critiques three students through the basics of the Grappelli style. After clearly demonstrating the concept, Tim breaks it down for the viewer and then corrects the on-screen students, allowing the viewer to learn along with the students. This method of instruction lends itself well to the DVD format. The main structure of the DVD is based around Tim’s concept of the 4 “T”s: Technique, Tone, Timing and Taste.

As a swing jazz educator, Kliphuis has an extensive class of students from Holland and abroad, has hosted dozens of workshops around the globe and was featured several times in American Fiddler Magazine.